Some of you might have thought that I had already unveiled all the weird food I have eaten when I published my article 7 dishes you don’t necessarily have to try, which is still a very popular post. But I have now remembered a few more… I hope you already have something in your stomachs!

Oh yes, you have read it right: Salad. Green tea. I can almost hear your questions: Why in the world would someone eat tea? And, most of all: Why would you let something rot first and then eat it at all? The mysteries of weird food in foreign cuisines…

In fact, Myanmar is a country in which you don’t only get to drink green tea, but also eat it. For this, only the best leaves of a harvest are selected. These are then boiled for five minutes – up to that point standard procedure for tea. But then the wet leaves are stuffed into bamboo sticks. And these are then buried underground or, at least, under heavy weights. There, the tea has plenty of time to rot, sometimes up to six months!

I dearly love South East Asian cuisine, but I also like the Indian. Myanmar, also geographically situated right in the middle, served a cuisine which seemed to combine some of the best things of the two mentioned above. Except maybe the sophistication of Vietnam. But altogether, there were very tasty things to be eaten. After two weeks in the country, I had a true feast in Bagan. And there it finally was, Lahpet, the wird food of which I had read so much already. 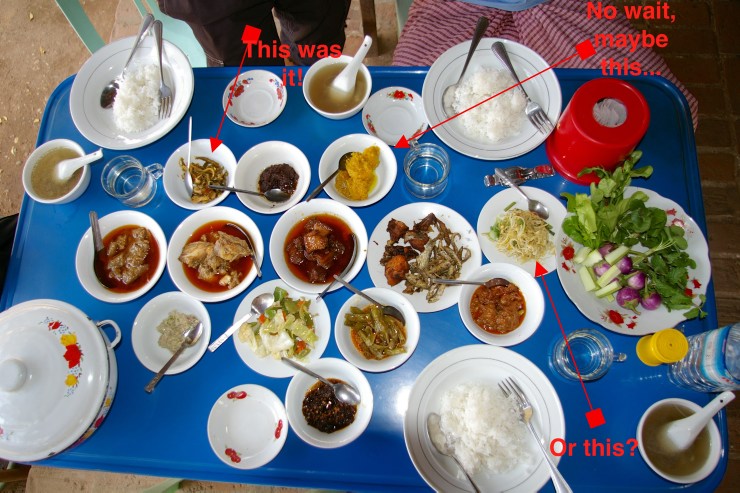 Where to get: At many occasions in Myanmar, especially at ceremonial celebrations.

Costs: Nothing. Just like you get free tea with any meal and even with your coffee, you get the tea salad as a complimentary addition to your food.

Tastes like: Actually, this weird food tastes exactly like you would imagine. Earthy, bitter, sticky, slimy, pungent. Probably not that different from a left-over bottle of beer at a party which you drink the morning after – with a few cigarette buds swimming in there. Also, I think the Western palate simply has to get used to filing taste nuances like this one under ‘salad’.

If you are traveling with Japanese people and these suddenly unpack their snorkelling equipment, you should be on your guard. Because they don’t just snorkel for fun, but mostly exclusively for catching supposed culinary treasures. Japanese hospitality will make them offer you some of what they caught. And, being the polite traveler you are, there is no way for you to refuse.

During a lazy afternoon on the beach in South Indian Kovalam I did not sense any danger when my friends from the Land of the Rising Sun approached me proudly with their catch: Sea urchin. Yes, they had really managed to declamp some of the painfully spiky guys from the rocks and bring them onto the shore. Now was the time for the cosy part. Solemnly, they cut one of the urchins in half for me, quickly levelling the two sides so that nothing could drip out. Then they added a little soy sauce and handed the weird food over to me with a spoon. I was the one who had the honor to try them first. Only when I had spooned out all of the slimy content, my friends would indulge in the rest of these weird creatures.

Where to get: Everywhere, where there are sea urchins. It makes you wonder though why, even in these regions, you never really find them on any menue…

Costs: A long breath, as the creatures make it really hard for you to catch them.

Tastes like: First the texture of this weird food: Pure slime. Does a sea urchin not have any organs at all?! In between, you will find a few remains of the cracked-open shell. You need to spit them out. The taste of sea urchins, however, is the most intensive sea flavor you can imagine. Compared to them, oysters taste like rose water. My personal urchin, however, tasted like something mother nature had not actually made for being eaten. I asked myself if it really had been still alive when my friends ‘killed’ it. Only three hours later I found myself on the loo.

This weird food had been on my list for long, even though the facts were quite sobering: A soup which really does mainly consist of swallow’s nests. And those, well, they consist of a few blades of grass which the swallows collected somewhere. But mainly of swallow’s saliva. Yep, SWALLOW SPIT!

On a food tour through Bangkok’s China Town I finally had a chance to try it. I hadn’t eaten anything during the whole day, as the culinary choice in this fascinating part of Bangkok was just unbelievable. For reasons of political correctness, we decided against shark fin soup, which you can get there in many places, in spite of international laws against it. Instead, we aimed for one of the shops with glasses of swallows’s nests piling up against the walls. Depending on the type of swallow and its habitat, the quality of the nest differs a lot, and so does the price. My eating-partner-in-crime Randy and I chose one from the middle of the price range.

Eating such a soup is something of a ceremony. After all, you also eat it for its health benefits. Together with the soup, you get hard-boiled eggs and honey as well as some green tea for washing it down. After a moment of hesitation, we started and tried not to think of drooling swallows.

Where to get: Probably everywhere in China. Or in China Town in Thailand’s Bangkok.

Costs: You can spend quite some money for a quality nest. There are some for 1000 Dollar a piece! Ours was something like 400 Baht, translating to 10 Euro.

Tastes like: And this, my friends, is precisely the problem. Because the bird’s nest soup doesn’t really taste like anything! I really tried hard to open all my taste buds to the delicate nuances of this specialty. But I couldn’t really taste anything at all. Thus, the honey was the only thing giving this dish a little accent. Otherwise, we might have just eaten porridge. Besides, there is a strange phenomenon: If you try not to think of the saliva of swallows, really the only thing you can actually think of is the saliva of swallows…

No, no, not the pasta brand. That would be a little too easy. On a small Greek island named Nisi Trikkeri, a Barilla is a small sea animal which looks like a mix between a fish and a shrimp. A delicate hermaphrodite, completely transparent if you hold it against the sun. Now if that isn’t weird food, what is?!

On a hot summer afternoon on this island off the coast of Volos, which was so small that it didn’t even have a tarred road, I went out in a boat with some locals. We cruised along the picturesque coast, jumped into the clear water and splashed around. But after a while of lightheartedness, my friend, whose parents came from the island, asked me to eat a barilla the way the locals had been eating them for generations: raw. Or shall I say, alive?

Obviously experienced, she grabbed one barilla after the other. You could find them around the rocks sticking out of the water. Then she always put one of the little buggers in her mouth, let it swim a few rounds there and then bit it in two, just to slowly swallow everything with pleasure. Her in her bikini, biting animals to death in such a barbaric way – I couldn’t deny the situation a little sexiness. But did I really have to also eat one now?!

But as I wanted to avoid the whole little island talking about me being a wuss at night, I let her talk myself into it. The small animal swimming around in my mouth was a very interesting sensation, but biting it to death was a lot harder. But then I did it. Quick and painless. And swallowed as fast as I could.

Where to get: Hard to tell, if these animals actually still exist in our times of overfishing. It would also be interesting to know what they are actually called outside of Greece. We have found them around rocks in the Greek Mediterranean. Beautiful Nisi Trikkeri, by the way, is worth a visit even without barillas.

Tastes like: I honestly have to say that I was so focussed on crushing the animal with my jaws that I can barely remember how it tasted. Crab maybe? Not even bad. But the killing process left a real trauma in me. Some people say that you should try killing what you want to eat. This will give you a whole new perspective towards the animal. I, however, have never eaten barilla again.

If you are an avid fan of South East Asia like myself, you can’t get around fish sauce which is already quite a weird food. Already at my first visit, I quickly made contact with it. Of course, its smell is horrible. And if you really think about it and realize that you are actually dealing with juices of decaying fish, it can be a bummer, too. But the taste is really OK, mostly salty. And sometimes, there is nothing better to put on your dish for seasoning.

During my time as tour guide in Vietnam, we once visited a fish sauce maker in Na Thrang, a village smelling of rotting fish through and through. Next to the big barrels of decaying fish, the guy told us that, just like with wine or aceto balsamico, there are collectors of rare and very old fish sauces. Apart from the sauce, there is the paste. And, if I have understood that right, it is nothing but fish heads which had enough time to decompose.

Such a fish paste – and even homemade – was offered to me on a hot day in Southern Cambodia. There was no way I could turn down the offer, as I had been invited into his house by a young monk and it was his heartwarming grandma who was offering me the paste. Even worse, I realized then that I was supposed to eat the disgusting cream together with some very bitter, unripe mangoes (read the whole story here). What can I say? Sometimes in life, you have to go through something which tastes very bitter and bad, so that something beautiful can arise from that.

Where to get: Everywhere in South East Asia.

Costs: Nothing. Just like the obligatory plate with herbs as well as the hellishly hot chili-vinegar, fish paste is a condiment which is usually offered for free with any dish.

Tastes like: Rancid fish. Very intensive (only mildly less than the sea urchin described further above), very salty, and somehow unhealthy. You can get used to unripe mango though.

I have a feeling that I will remember a few more of the weird food I had on my trips. And it is almost entirely safe to say that I will add a few others on my current India trip!

Something which is actually quite nice to eat is fried silk worms! Very tasty especially in combination with liquid, fermented tofu. Yummie! (I have eaten this dish on my farewell night at District Mot, Berlin)