Strange foods? Before I drew the consequences and became a Vegetarian, I virtually ate everything anybody anywhere waved in front of my face for too long. This lead to many surprises and some culinary experiences of unanticipated intensity.

But you know how life is. Not everything that glitters is gold. From all the weird dishes I have tried on my travels, I have selected seven strange foods which you can easily miss out on.

Often mistaken as a common cockroach due to its appearance, people offer this cute animal fried in one piece on Thai markets. That, on the other hand, does not mean that it should be eaten in one piece, too.

Three weeks after the consumption of one of these insects and now in a different country, I had three Cambodian bar girls explain to me which parts of an insect should actually be eaten and which shouldn’t, using a smaller bug as a model for their teachings. Normally, you only eat the softer inner part. You don’t eat its legs or head, let alone the shell. That at least explained the disgusted look on the face of the waterbug saleswoman a few weeks earlier, watching me gulp down the whole creepy thing and almost throwing up afterwards. Stupid, stupid tourists.

Where to get: At a market in Thailand, if you’re lucky. It seems to be a Northern specialty.

Tastes like: A disgusting mix of sewage, chemical fertilizer and the slimy stuff you find on boats which have been sitting in the harbor for a long time. Not that I have licked on one of these boats. Seriously.

At markets in Vietnam you get your frog neatly sliced and cooked with interesting marinades. If you don’t know it, you might as well take the meat for a delicious chicken. Even the bones of these big frogs surprisingly resemble the ones of a chicken.

It’s a different story in Lao. Here you get a skewer full of frogs, fried in one pice just like they have been caught. These frogs belong to a smaller, brownish subspecies. You don’t really want to know where they have spent their time before simmering in the oil. The indulgence in these little guys is a rather chewy, unsavory affair and even a bag of tasteless sticky rice does not help to make it any better. 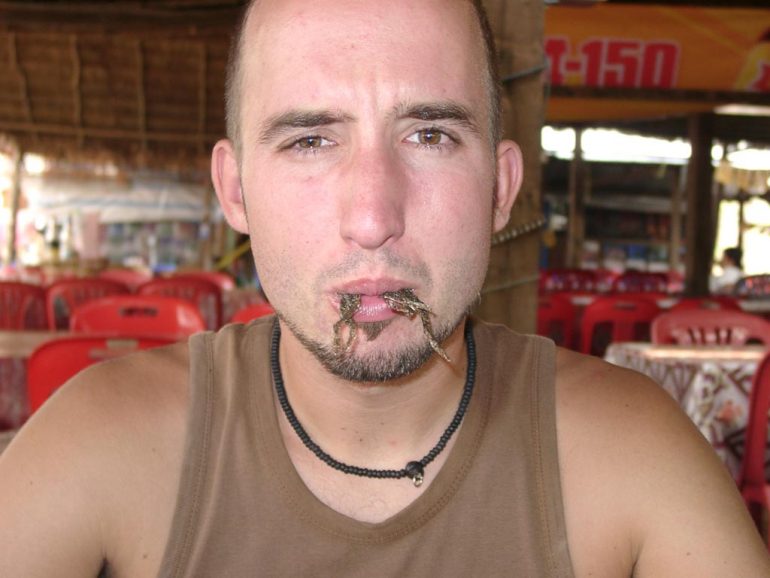 Where to get: In rural areas of Lao PDR.

Costs: Not too much. As you are getting a whole bunch of frogs at a time, the price per frog is probably around 5 Euro Cent.

Tastes like: A piece of plastic on which a bit of rainwater had enough time to rot. That, and a whiff of the aroma you get when you burn some hair on your hand while lighting a cigarette.

I wanted to get out of the monotony of the rural Guatemalan cuisine. If you wanna call it a cuisine at all. For two weeks people had served me nothing but beans and rice (commonly known as Gallo Pinto, painted rooster) as well as a couple of fried potatoes without any seasoning whatsoever. When I ordered one of the three dishes on the menu in this so-called restaurant in the middle of nowhere, unfortunately I didn’t have a dictionary with me. My Israeli travel partner, unfortunately, spoke even poorer Spanish than I did.

Only after choking down two thirds of the leathery and tasteless piece of meat, accompanied by the above mentioned sides, did the waiter explain with hands and feet what we were actually eating. Stomach, rumen, bowels, I am not even entirely sure about it now. But it was definitely something from deep inside the cow. That was the end of our dinner.

After this little intermezzo, the sparingness of Gallo Pinto had a whole new quality.

Where to get: Everywhere where there is nothing else in Central America.

Costs: About twice as much as the sides alone. If my memory doesn’t play tricks on me, we are talking around 4 Euro.

For Westerners it is a little hard to understand why you would take a chick out of its egg just a few days before hatching, only to throw it into a frying pan straight away. But some weeks earlier, you would have eaten the egg, wouldn’t you? And some months later the fully grown chicken. So what’s with all the politeness?!

The tiny chicken on a skewer demands some delicate tooth work, the patience of a saint and a good portion of modesty. When you have finally succeeded in gnawing the few grams of meat from the thin bones, you start to feel really sorry for the baby chicken having had to die for such a minimal pleasure. The amount of meat is not even worth being called a snack. Afterwards, you are busy for hours pulling bone splinters out of your jaw and cheeks. A very unsatisfied and guilty feeling remains. 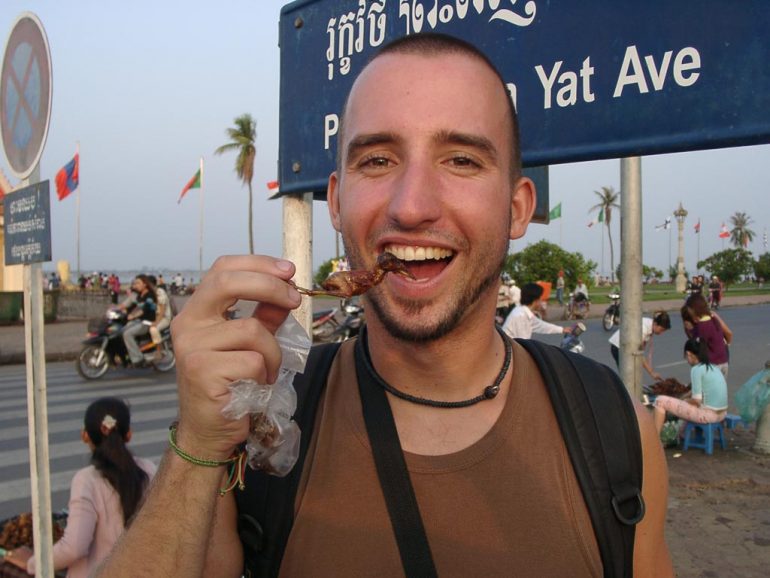 Where to get: At the banks of the Mekong river in the Cambodian capital Phnom Penh.

Costs: The fracture of a Euro.

Tastes like: Pretty much exactly like a big chicken. It probably all depends on the marinade. But the meat of this teeny tiny chicken adds up to about a tenth of a wing of an ordinary German broiler.

I had already heard a lot about this strange food which has its origin in China, but is also quite popular among the culinarily experimental Thai people. The egg, fortunately, is not 1000 years old after all. However, it can be pickled for up to 100 days in some sort of clay pot with varying ingredients. That definitely makes it older than any normal egg served in Central Europe.

After having seen many pictures of this strange egg which looks black and hardly attractive, I finally found a salesman on a little river island near Bangkok during my umpteenth time in Asia. On this island, fried orchids and other colorful flowers were the main attraction, so the egg guy did not have many customers. I purchased an egg and started eating it. But I couldn’t really enjoy it. Too intense, too rotten the taste, too unsavory the dark color. And then it was so damn dry that I only managed to swallow the last bits with the help of a large Chang beer. So I decided one piece was more than enough and went back to chewing the fried orchids.

Where to get: In all of Asia.

Costs: These eggs cost comparatively much. But the vendor has already put quite some effort into it. Around 2 Euro per egg.

Tastes like: A 1000-year-old egg. No kidding. And this, obviously, is not everybody’s cup of tea.

As a person with a mild form of arachnophobia this meal cost me quite some effort. But I had been looking to find this extraordninary culinary pleasure for months already, be it only to show off with a picture of the prey in my mouth later on. And after a few days of looking around Cambodia’s capital, I really did find the specialty. There was a big bag full of alive spiders, each one as big as the palm of my hand, next to the salesman. Fortunately, he had the bag tied up well.  In front of the barbecue, some fried specimen were piled up to a barely decorative tower.

I started – the physiognomy of the spider dictates it – with the legs which did not taste very different from Thai maggots, ants, scorpions or crickets and were nice and crunchy. But when I got to the body, all of a sudden I started to feel nausea. The body had the texture of a big Hubba Bubba chewing gum which has been in the sun for a few hours. With the obtrusive taste of something rotten. I had to surrender. I gave the leftovers of this snack to an old man just after the souvenir snapshot. He thanked me with a toothless smile. The tree spider is a delicacy in Cambodia. 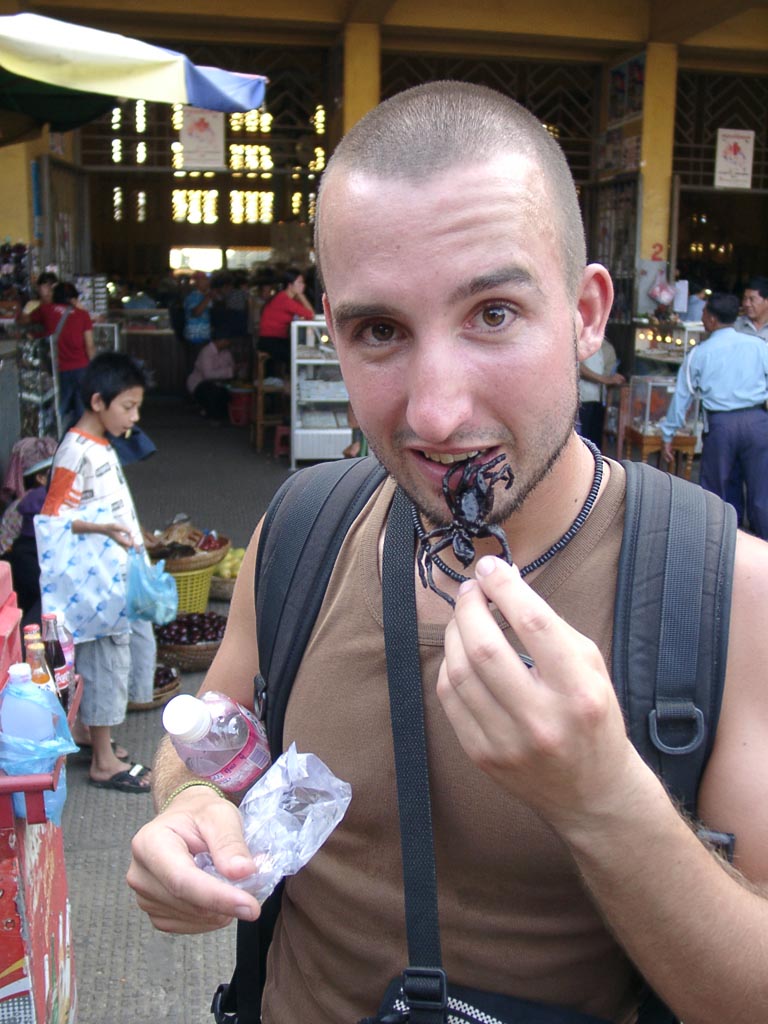 Where to get: At certain markets in Cambodian Phnom Penh.

Costs: Compared to other street food like e.g. fried squid it is rather pricy. I reckon a spider was around 2 Euro.

Tastes like: Something you shouldn’t be eating. Just thinking about that taste together with the above mentioned texture is still making me feel sick today.

I was withheld the mellifluous label of this dish just the way that nobody told me about its ingredients either. That is, exactly up to the moment when I wiped the last little bit of fluid from a bowl with a junk of sticky rice from a plastic bag. In a weird, almost perverted way I had seemed to like this sauce which my Laotian colleagues had gotten especially for me when we were playing boules and drinking beer in the backyard of the company I worked for.

I should have been taken aback. My colleagues had curiously and mockingly watched every bite that went into my mouth.

In the end, they gave the game away. I had just eaten a sauce mainly made from half digested grass and gastric juices from the inside of a recently slaugthered cow, refined with some herbs. That at least explained the sour taste. And the sporadic blades of grass… While the guys patted me on the back approvingly, I downed a Beer Lao and moved all of my thoughts back to the game of Boules.

Where to get: Only as a Laotian and only in special shops.

Tastes like: Very sour vinegar with undefinable spices, moldy and acrid at the same time. A taste which you don’t really want to like. Which is much easier when you finally know where it is coming from. 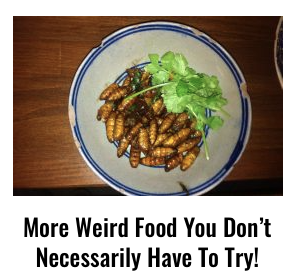 Written By
Marco Buch
More from Marco Buch
After having come to Phuket 4 days after the Tsunami in order...
Read More