Some things really seem meant to happen, the events just magically fall into place. Especially while travelling, these strange chains of events which some people would airily label coincidence happen more often than normal.

My plan is to go see this weird vehicle, the only electric train in Cuba, without really knowing much about it. I have read somewhere that – like so many other things in Cuba – it is a relic from former times, and that it moves extraordinarily slowly. I have always had a faible for ramshackle trains and, the slower they drive, the more you can watch all the things happening along the tracks.

Thats’s why Matanzas is on my itinerary on the way back from Southern Trinidad. The so-called Hershey-Train operates between this industrial, untouristic city and Havana. As there were no buses to Trinidad, I had to travel to the all-inclusive-ghetto Varadero instead and sleep there. I have spent the night in a rancid room with big, bold cockroaches. Now I need to find out if, when and where this train leaves from, which draws me towards it so strongly. I hike along the less developped part of the beach and pretend to be a guest in one of the hotels. With the help of a receptionist and after a few phone calls which I only partly understand, I learn that there is only one train going today and that it is bound to leave at 11 already, according to the schedule. Luckily, my persistent stomach parasite has woken me up early today, so it looks like I can still make it to Matanzas in time.

I collect my bits and pieces and cover the 30 kilometers the Cuban way for the first time, meaning in a so-called ‚Guagua’, a truck with benches on the platform where I cuddle with the locals. But the vehicle stops at every little corner and I am losing precious time. When I finally get off in a hassle, I loose my mafioso hat which has been a faithful companion during the last weeks. I only notice the painful loss when I am already sitting in the taxi which is on its last legs. It is a 57 Oldsmobile, not a rare car in Cuba. I ask the old driver if the engine is original, too. ‚Si, original Toyota!’, he says with a wide grin and pushes on the gas dauntlessly. We have just realised that we have exactly 4 minutes left until the departure of the train. 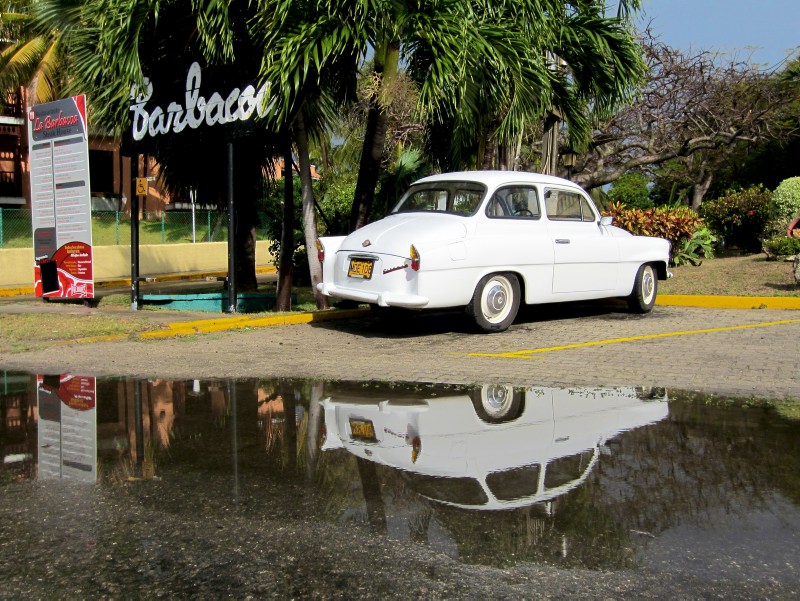 But my driver seems almost more determined to get there in time than myself. Honking the horn, he drives around slower vehicles, uses the oncoming traffic lane for a good part of the distance, and finally pulls out all the stops, looking around quickly to see if there is police and then entering a one-way street against its direction for the last kilometre. When we reach the train station, the doors of the train are just closing. I hastily pull my backpack out of the car and hit a passing cyclist with it who can barely keep on his bike. Then I tip the taxi driver generously, while he is yelling at the train conductor to please wait for me.

With quite an effort I climb into the train from the wrong side. It starts moving about three seconds later. I have to smile. 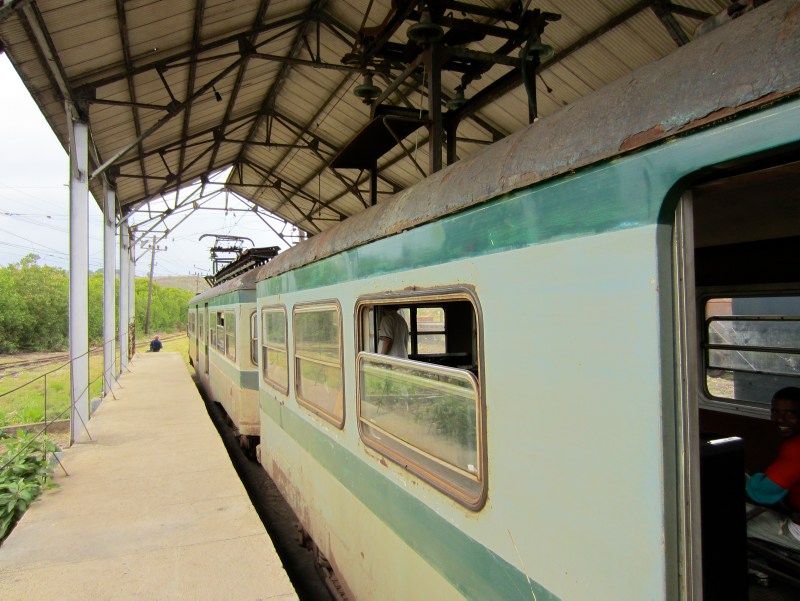 The train, just like a cable car moving along an electric cable, was built in the beginning oft he last century by the chocolate giant Hershey who owned huge sugar plantations in Cuba. Different from most other American entrepreneurs in the country at that time, he did not treat his employees like slaves and was even awarded a medal of honor for that by the Cuban government. He built sugar factories, cities, schools – and this strange train which has been running ever since. That is, if it actually runs and has not been stranded somewhere again. The sugar factory the train line connected to Havana has been long gone though. It was passed on to the Cuban government after the revolution and closed down some time later when the demand for sugar had faded. 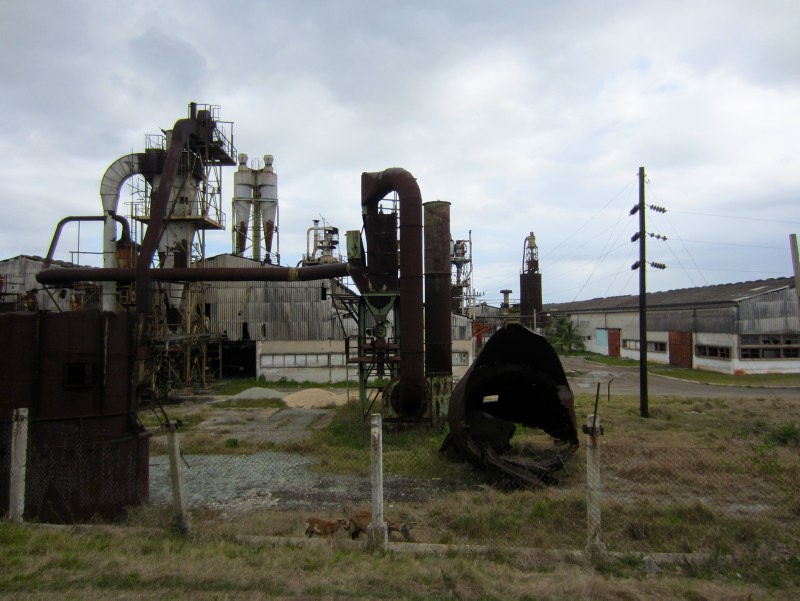 The train in which we are travelling is actually a present from Spain from the 70ies, so not that old, but falling apart everywhere regardless. I get the impression that the tracks have never been serviced, as they shake around the old train in spasms while we travel through the rather plain countryside of Northern Cuba. With every jerk, the fuse box and the doors open and close, there is creaking and yowling coming from every corner. If you don’t want to be shaken off the wooden benches, you better hold on to something.

I start talking to a charismatic guy from Hamburg. The two of us are part of around 10 tourists on the train. This ride does not seem to be everyone’s cup of tea. The locals, on the other hand, even manage to sleep cosily in spite of all the movement and noise. My conversational partner is a pastor in the godlesss quarter of St. Pauli, travelling through Cuba in search of the santeria religion imported from Africa with all its sacrificial ceremonies, and has very interesting perspectives on the current state of the world and the state of mind of the people inhabiting it.

When I need to pee, I ask the porter (price for the roughly 100 km which take around 5 hours: $ 5) if there is a toilet on the train. There isn’t, he says, and politely asks me to follow him instead. We work our way through the three waggons to the locomotive. There, he tells the conductor that my bladder needs relief. The conductor doesnt’ hesitate a second and stops the train in the middle of nowhere. The two of them explain to me that it is now safe to urinate in front of the train. I find that so funny that I have some trouble relieving myself. There is a train parked behind me with about 50 passengers and all of them need to wait until I have released my last drop.

When I climb back into the cab, the conductor asks me if I would like to drive the train. Of course, I say, entirely sure that he is joking. He isn’t. He says, someone is going to pick me up at my seat when we reach a less hilly area. The day just keeps getting better. 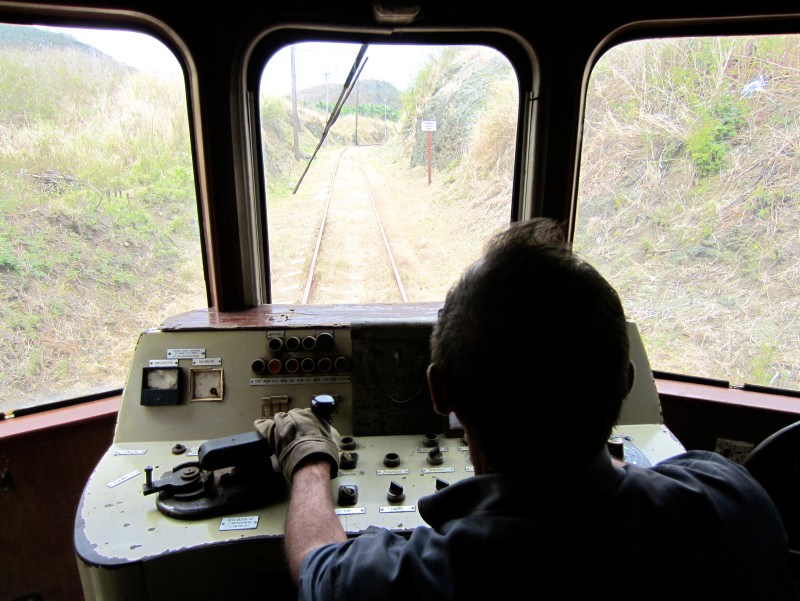 After some more thought provoking conversations with the pastor and some Cubans, as well as a few moments when people do not seem so sure if the train will actually keep on moving, there is indeed one of the porters approaching me and waving me towards the front one more time. Again, we have to jump over abysses opening up between the rusty waggons, again, we have to hold on to anything possible to prevent from being thrown to the ground violently by the rocking motions of the train.

Once we get to the locomotive, the conductor moves from his seat after he has, once again, stopped the train just like that. Hesitantly, I sit down and can’t hide my excitement. ‚It’s very easy’, the guys say as if they were talking about a crossword puzzle. I hit a pedal on the left which sets off the deafeningly loud horn. Then I release the break with my right hand and use some sort of wheel with my left which adjusts the speed. Next thing I know, we shoot through sugar cane plantations and hills strewn with palmtrees and grazing cows. The guys seem almost as happy and excited as I am, and we joke around and laugh while I am desperately trying to stay on the little seat attached to a metal lever.

For the next ten minutes, and almost without any help I maneuver the Hershey-Train, a full-size train! One time, I have to honk away a confused goat and two times I have to stop at tiny train stations to pick up more people. I slightly miss the first stop as I am obviously way too fast. The conductor helps me with backing up the train a few meters. After the train refuses to cooperate for a few minutes, and the conductor persistently shakes around some switches and levers, we move on. At the second stop, I manage to break so precisely that the entrance door gets to a halt right next tot he passenger waiting. The guys pad me on the shoulder with approval. 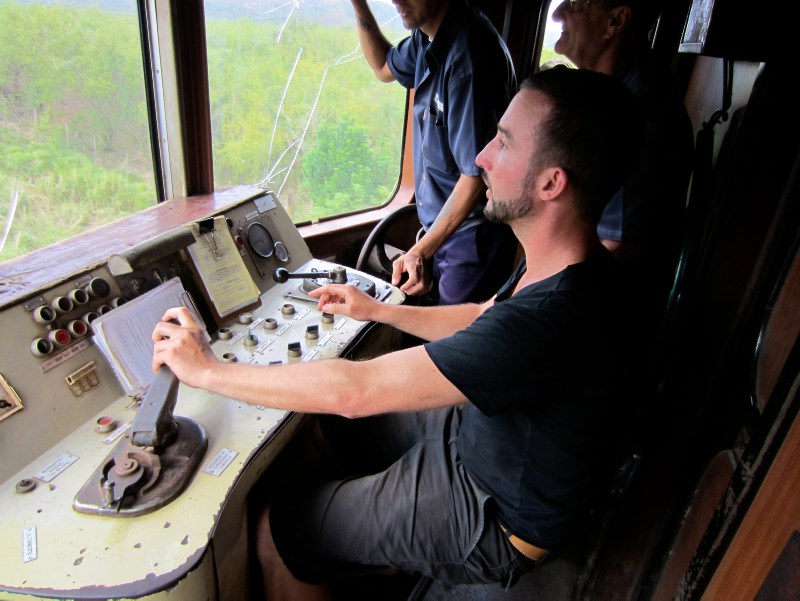 When I eventually return to my waggon, I am almost hovering. That was definitely one oft he highlights of my time in Cuba. Different from many other people on this island, which is so hard to understand, I have the feeling that the Hershey guys are actually happy with their lives. No wonder, with this job. And, different from anywhere else, noone asks me for money after the experience I have just had. I am pondering for a bit if I should just give them a little tip without being asked, but decide that this could really spoil the whole experience and maybe even devaluate the generosity and friendliness of the men.

The train really makes even the last kilometres without breaking down, which could be considered extraordinary. In the late afternoon, the monster spits me out on the Eastern shore oft he Bay of Havana next to a fortress and I slowly make my way back tot he other side in busses and taxis.

Once more I have noticed that a lack of planning sometimes leads tot he best travel experiences. And that there are things you will simply end up experiencing, beating all the odds. 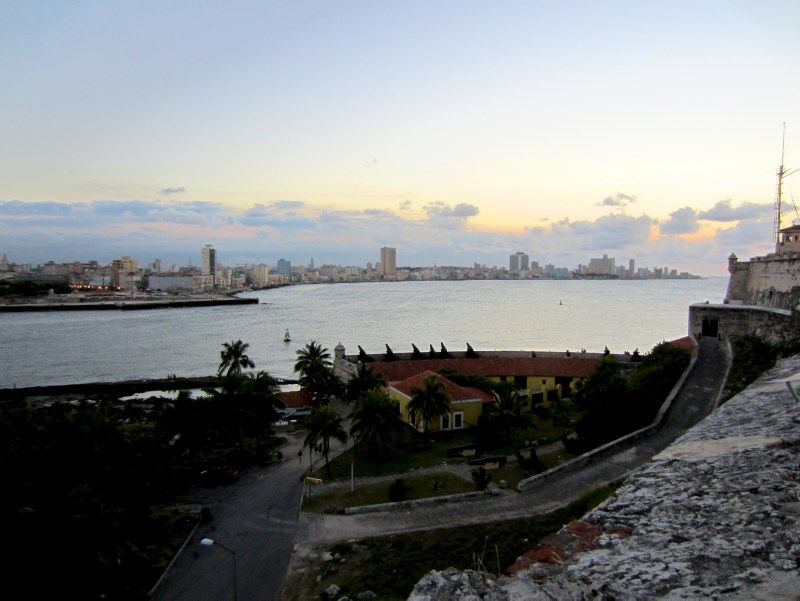 Written By
Marco Buch
More from Marco Buch
“The world’s most beautiful cemeteries?!”, I hear you ask. And yes, I...
Read More